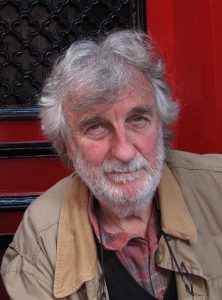 Leon Saunders’ writing career began with the publication of Shadow People, a photo/essay on Sydney’s ‘Skid Row’. He followed this with a long career as a television scriptwriter on shows such as Home and Away, Carson’s Law, Flying Doctors, A Country Practice and the top rating mini-series Cyclone Tracy. He has won four Australian Writers Guild ‘Awgie’ awards, a ‘Penguin’ from the Television Society of Australia and a Media Peace Award from the United Nations Association. He scripted the feature-length documentary, With Prejudice, on the infamous ‘Hilton bombing’ trial.

In 1995 he won the ‘Suspended Sentence’ award through the James Joyce Foundation, earning him an eight-weeks residency at Trinity College, Dublin.

Trapper, the winning entry for the ‘Sentence’ award, was the catalyst for his shift from script writing to the prose fiction form. The Gaze of Dogs is his first novel.