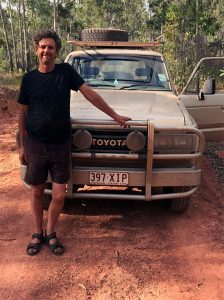 From the 1980s, Peter Botsman, a fifth generation descendant of an Irish convict, began to witness Yolngu Aboriginal ceremonies in North East Arnhem Land. His friendship with Yolngu elders unlocked a series of dreams from his own life. Wakuwal is a story of these dreams. It is a series of dreams of ancestry and hopes for the future. The stories that came from the dreams are an attempt to come to terms with the European invasion of the great southern land.

Can European and Aboriginal Australians interact in a meaningful way? What were the blockages and opportunities over five generations and over 200 years? Can there be points of commonality in spirituality and life? In a famous song by Yothu Yindi, Dr M. Yunupingu sings of the feeling of reverie that comes over Yolngu people in ceremonial activities and song: “… the rhythm of the yidaki bilma, Carried us far away back to the dreamtime, Back to another place this is a different dimension. Only us Yolngu will ever know.” (‘Yolngu Woman’,1989)

The Wakuwal dream world is not the ‘different dimension’ that only Yolngu can see, it is a new kind of connection that gives some understanding of the precious quality of Aboriginal culture as ‘the voices of the land, sea and sky’. The assumed superiority of European culture that still defines European and Aboriginal interactions dissolves. Aboriginal Australians must lead Australians into the next era of Australian history, not the other way around. In so many ways non-Aboriginal Australians do now want to learn and to find the connectedness that is the basic, essential fabric of Aboriginal life.