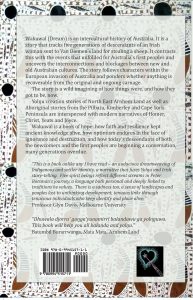 Wakuwal (Dream) is an intercultural history of Australia. It is a story that tracks five generations of descendants of an Irish woman sent to Van Diemen’s land for stealing a sheep. It contrasts this with the events that unfolded for Australia’s first peoples and of the inter-connections and blockages between new and old Australian cultures. The story follows characters within the European invasion of Australia and ponders whether anything is recoverable from the original and ongoing carnage.

The story is a wild imagining of how things were, and how they got to be, now. The narrator is alternately a spirit being from Éire, an eagle, an octopus, fire, a willy-willy, a sacred dog bounding across the continent, and bäru the crocodile.

Yolŋu creation stories of North East Arnhem land embedded in sacred designs as well as Aboriginal stories from the Pilbara, Kimberley and Cape York Peninsula are interspersed with modern narratives of Homer, Christ, Yeats and Joyce.

Wakuwal is a book of hope: how faith and resilience kept ancient knowledge alive, how optimism endures in the face of ignorance and destruction, and how today’s descendants of both the newcomers and the first peoples are beginning a conversation, many generations overdue.