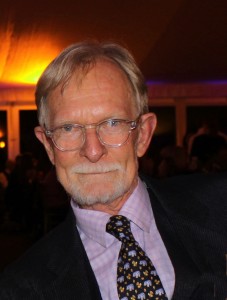 Jim Anderson has always been pulled towards both the literary and the visual arts. He graduated as a lawyer from Sydney University in 1961, but says he can’t remember anything he learned. He discovered bohemia and frequented the Sydney Push in the late 1950’s and was soon caught up in Sydney’s counter culture. Where Have All the Flowers Gone, his roman a clef based on those experiences, remains unpublished.

He became Art Editor of Oz Magazine in the UK in time to be put in the dock as a conspirator in the famous 1971 Obscenity trial at London’s Old Bailey. After the demise of Oz in 1973, he spent 20 years in the US where, as well as engaging in various hippie excesses, he edited the Monday edition of The Bolinas Hearsay News, for which he also designed front covers and wrote a column on the previous week’s events. During that period he also worked as amanuensis for writer Charles Fox (The Noble Enemy, Portrait in Oil) and had a novel of his own published, Billarooby (1988), a wartime story set in the Australian outback. Billarooby received international rave reviews.

Since returning to Sydney in 1993, Jim has continued his editing, writing and photo-artist careers and still plays an active role in the cultural activities of the GLBT community. Anti-establishment satire has remained a focus. Exhibitions of his art include a major retrospective, Lampoon, an historical art trajectory 2011 at the University of Sydney’s Tin Sheds Gallery. The artwork exhibited and a brief memoir were published and copies can be obtained from the author.

It has been said that, of all the youthful Oz-related revolutionaries, ‘it is only Jim Anderson and Martin Sharp who have apparently attained life membership of Bohemia.’